Oscillations of Coupled pendula is an interesting phenomenon in Physics.

A one dimensional oscillation can be thought of as an object moving back and forth about an equilibrium position. In this experiment we consider the oscillating system of two coupled pendulums (they are coupled by springs).

If we connect two identical pendulums with a spring, one is held by hand, and another is deviated aside so the spring is stressed and then both the pendulums are released. How they will move? Intuitively it seems that the still pendulum will set into the motion under action of a spring and after a while both pendulums will oscillate chaotically.  Actually Something very interesting happens.

The pendulums will periodically exchange the energy and stop by turns.

In this experiment we can study this periodic “swapping” of energy in two identical pendulums coupled with a spring.  If we swing one pendulum, then the oscillatory energy will begin to be transferred to other pendulum. After the end of this process the energy will be transferred in the opposite direction. Thus, there is a periodic exchange of energy between the pendulums. As a result the amplitude of oscillation of every pendulum is periodically changed. When one pendulum oscillate with the maximal amplitude the other one is still.

Here is the experimental set-up….
Pendulums are fixed to DC motors (we are using these as pick-up device as rotational motion sensors are very costly). The emf generated is amplified amplifier in ExpEYES and is fed to channels A1 and A2. Using voltage capture functions plots are obtained. 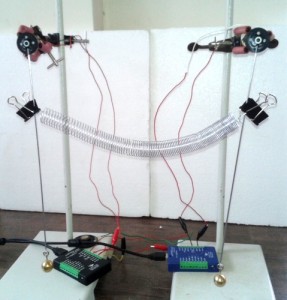 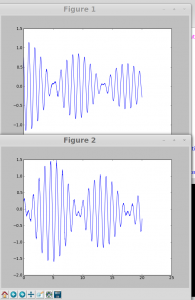 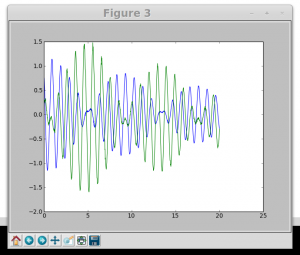 Using subplot function of matplotlib the following figure is obtained. Here one can easily compare the waveforms of two pendulums. 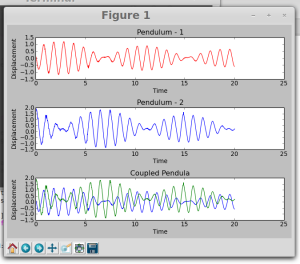 This experiment can be performed by oscillating pendulums in different ways…

When both the pendulums oscillate in phase 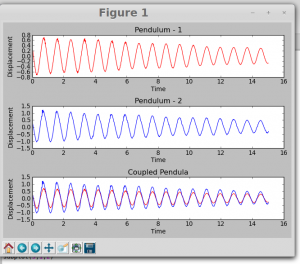 When  pendulums oscillate out of phase 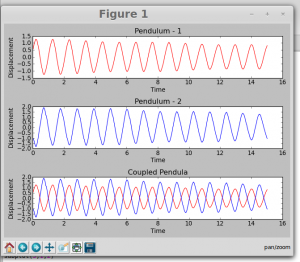 What is really happening?

Powered by WordPress | Hosted by Edublogs | Protected by CloudFlare